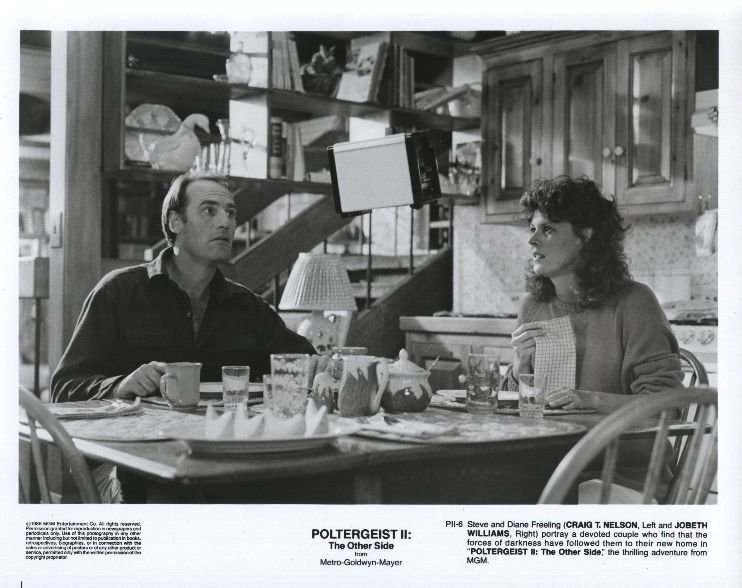 (above, a scene cut from the film in which Steve and Diane notice some poltergeist activity involving their toaster. This scene would have come right before the sequence when Kane walks up the driveway)

I received the following information from Scott Smith, who was one of the editors on P2:

Hi David, After looking at your website, I will follow up by saying that I was part of the team of picture editors brought on to work on the film. Thom Noble had previously committed to editing Mosquito Coast and was unable to finish the film.  At that time MGM hired Bud Smith as the supervising editor to oversee the final stages of the film. I was part of his picture editing team along with Jere Huggins who is also uncredited. We worked with the visual effect supervisor John Bruno, director Brian Gibson and producers Mark Victor and Mike Grais to tighten the film by first removing 15 minutes and then re-editing the balance of the movie. We presented our re-edited version of the film to the studio and at that point the film went into the final stages of post production and completion. If you are in contact with Mike Grais he would best tell you what was removed from the original scripted version as I was only working with the assembled film that was turned over from the previous editor. We did not put material back into the movie as it was running very long and needed to be paced up. Yes I agree that a SE DVD would be nice too. I am currently putting the polish on a DVD version of William Friedkin's "Cruising" for Warner Bros. This was on the shelf and is now being dusted off for a possible limited theatrical re-release and screening at festivals around the world in the near future.

From my interview with Michael Grais:

I asked him about the following alleged deleted scenes:

1. A toaster floating in the air above Craig and Jobeth in the kitchen
2. A dream sequence of Rev. Kane walking into the bedroom of Carol Anne while she's on the phone: 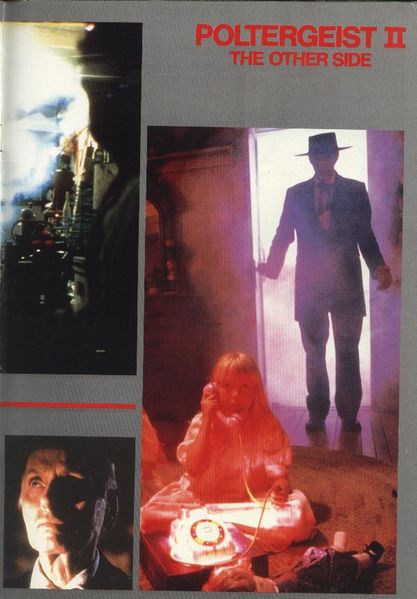 3. A scene of Taylor building a fire in the backyard at night, while the Freelings sit close by (this scene was in an early draft script I read).
4. A scene in which Dana's being away at college is mentioned

All 4 scenes were shot -- but none exist that [I know] about.

In October of 2005, I went to L.A. on vacation, and made it to the Margaret Herrick Library in Beverly Hills. There I was able to read and take notes on the 3 early drafts of the P2 script. Here they are:

1. After Diane hugs Carol Anne and tells her "Darlin, you can be anything you want to be," Carol Anne says "Can I be Robbie's wife?"

2. On the porch, Kane (who in this script is still called "Rev. James T. Boatwright," tells Steve about Taylor:
"He claims to be a Hopi, sometimes a Navajo...his real name is Ben Lagou." (the novelization of P2 states that "Ben Lagou" was a former member of Kane's cult, who left the group before they sealed themselves up inside the cavern to die. Ben later reincarnated and was reborn as the Indian Taylor. That's why Taylor knew who Kane was and why he was fighting him).

3. Later, when Steve has drank the worm and is arguing with Diane, Robbie walks into his bedroom and looks at his computer screen. He sees letters, equations, and numbers scrolling strangely across the screen. He stands there and stares at it.

4. Right before Steve vomits the worm, Diane asks him: "What about your obligations to me and to this family? Why don't you stop acting like a spoiled child and live up to your responsibilities?" to which Steve replies:
"Maybe you'd be better off without me around, Diane! Maybe I should just take off and figure out what's best for ME for a change!"

5. After the vomit creature leaves the room, Diane walks into the hallway and starts looking for the kids. The Beast is inside the walls and ceilings, and ripples can be seen moving under the wallpaper, fingers reaching out of it toward her. The ceiling starts breathing and skinlike membranes, like cancer, start flaking off. A seascape painting Carol Anne made earlier and put on the wall comes to life with water and sea animals; they drip down the staircase.

6. In the garage scene, the garage "grows and extends" (like the hallway scene in the first movie) so the Freelings cannot get out. Finally, they back the car up enough and it crashes through the garage door.

7. In the cavern, Steve expels his "power smoke" into the fire Taylor has set before jumping into it with Robbie.

8. On the other side, Steve yells at Boatwright's followers: "He is not God," to which they start moving into the Light and Boatwright, seeing the Light, is "blasted away into a dark tunnel." (in the first draft script, Boatwright goes into the Light with his followers).

9. At the end, Taylor brings the family up the surface of the lot, and they all watch as the other lost souls from the Cuesta Verde cemetary rise up out of the ground and get pulled into the "biloation point" from where the house vanished in the first film. Grandma Jess appears once more before going back into the Light. There is then a simple "fade out" ending, no discussion between Steven and Taylor about the car, etc.

10. Also notable about this script-in the first draft, it is Dr. Lesh who is working in the cavern in the beginning; this draft replaces her with Tangina. In addition, unlike draft one, where Dana is referred to as being "away at college in Boston," there is no mention of Dana in this script.

1. Inside the cavern at the beginning, there is a pictograph on the wall that Taylor notices. It shows a snake crawling from a man's mouth (in the final film, this pictograph can actually be seen on the cave walls if you look closely enough. It's also mentioned in the P2 novelization by James Khan).

2. Right before the storm sequence when the ghosts first come back and talk to Carol Anne on her toy phone, there are several shots of water dripping from the ceiling in parts of the house as the rain begins to fall. The first shot is inside the garage, and we see water dripping slowly onto Robbie's clowndoll from the first film. The water drips down its face "like a tear." Later, while the family is trying to escape the garage and the car is being pelted with nails, paint, etc., the clown doll appears on the windshield, forcing it's head onto it and cracking the glass. It's obvious why these two scenes were taken out of later scripts-it wouldn't have made sense since the clown doll was sucked away with the rest of the house when it vanished.

1. In the morning, right before Kane walks up to the driveway, Steve and Diane are inside the kitchen drinking coffee. Steve attempts to put some bread into the toaster. The toaster starts jumping around, intentionally moving away from Steve each time he attempts to place the bread inside. Finally he says "So...I guess I'll just forget having toast...who needs toast? I like nice cold bread." Diane reaches for the toaster, and it doesn't move away from her. She smiles and says "Our toaster is angry with you." Steve reaches for the toaster again, but this time it floats up into the air and away from Steve. He finally reaches for it and dunks the bread inside like a basketball, and brings the toaster back down to the table. He smiles in victory (a still publicity photo of this scene showing the toaster floating in the air still exists).

2. After the family has escaped the garage and is headed back to Cuesta Verde, they stop at a road side gas station. The gas station attendant stands there looking at the Freelings' beat up car, his mouth dropping open. Steve attempts to roll down the window, but the window falls out of the door frame and shatters on the pavement. Steve looks up at the attendant and says "Could you fill her up? And change the tire while you're at it."

3. And the end (which still features the Cuesta Verde cemetary spirits going into the bilocation point and Jess appearing once more) after the "fade out" there is a title card on a black screen which reads "In Memory of Dominique Dunne." ROLL END CREDITS.
Also from this draft, in a page which was revised 5/14/85, this scene can be found (publicty still below)
EXT. GRAMMA JESS' HOUSE/FRONT YARD-SUNSET-DIANE, TANGINA
They walk together toward Tangina's car.
TANGINA
I want you to know something...I'm afraid. That's the real reason I haven't been here.
DIANE
I understand.
TANGINA
There's something else I feel you should know...The authorities are going to seal off the cavern..the day after tomorrow at noon...citing "health regulations."
Diane hugs Tangina.
DIANE
Maybe that'll end it all.
Tangina shrugs.
DIANE
I'll miss you.
TANGINA
God bless, child.
Tangina gets in her car and drives off, leaving Diane watching her, sadly.

In addition, I learned from Zelda's former publicist that a (revised) scene involving Tangina and Kane right after the above conversation was also cut:"Some of her best scenes went onto the cutting room floor. I don't recall all of the scenes now but one of them, as I do recall, involved a direct confrontation with the evil Reverend played by Julian Beck. Zelda was quite upset about it as she felt that was one of her best scenes (I never saw the scene nor was I there when it was filmed)." Later Writer/Producer Michael Grais did confirm this:"Yes, I do remember something like that...it was a great scene. Sorry it didn't make it in."

Allegedly (I haven't been able to confirm this yet), here's a general idea of what took place in the scene:

In the scene Kane tries to torment Tangina while Diane tells him to leave them alone. Kane says he remembers Tangina from taking Carol Anne away from him. He then says "You won't win this time." 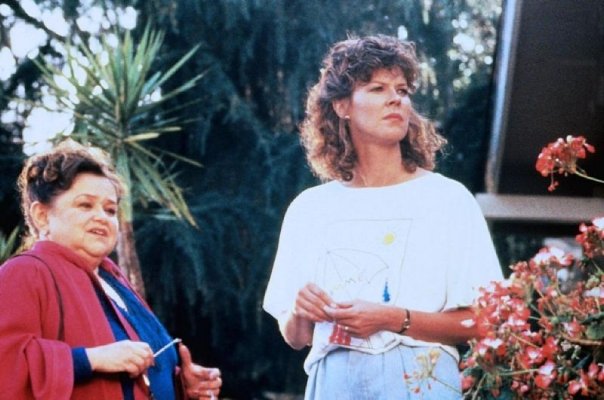 If you'd like to read the first draft script of "Poltergeist II," it can be found at Craig Sinclair's online Heather O'Rourke Article Library here:

"Poltergeist II: The Fan Site" Copyright © 2006, 2015 David Furtney. All Rights Reserved. The motion picture "Poltergeist II: The Other Side" is Copyright © 1986 Metro Goldwyn Mayer, Inc. This fan web site was neither created nor endorsed by Metro Goldwyn Mayer; it is intended solely for informational and research purposes only. No copyright infringement is intended.